In December 2012, a small committee of Junior Cricket Mums decided to start junior netball at Briars. In 2013 two teams were entered into the IWSNA competition played on Saturday mornings at Cintra Park. (Under 10s and U12s) We also started a Mini Magpies program for little ones starting on their netball pathway. With 23 girls and a devoted committee we were underway.
Since then the club has increased dramatically and in 2015 we had 12 Winter teams, 13 Summer teams and 40 Net Set Go Girls
Over 200 players and participants enjoyed playing for Briars and will continue to in the years ahead
Our Goal is simple…

If you wish to join or find out more about netball at briars please email netball@briarssports.com.au 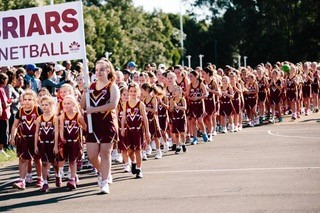