We would like to inform our members of the passing of Spencer Hipwell, one of our oldest members.

Brian Williams, Peter Hotten, Lex Yule & Spencer Hipwell coached the Briars Rugby Kentwell team who went on to win the Premierships and Club Championships. Spencer was also the architect of the first New Zealand Tour in 1960 and with his wife, Liz, a regular at Rothwell up until the last 2 years. Our sincere condolences to Liz, Scott and Spencer’s family. 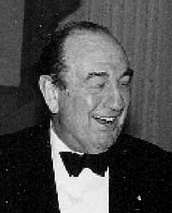 For many years, until recently, at about 3pm, a man arrived at Rothwell Park, and sat near the goal posts at the Briars Sports end of the ground. His name was Spencer Hipwell, and he came to support his beloved Briars. He also made it to as many of the away matches, if it was near his Beecroft home. Spencer was usually accompanied by his wife Elizabeth or son Scott, who also played for Briars……Read More.