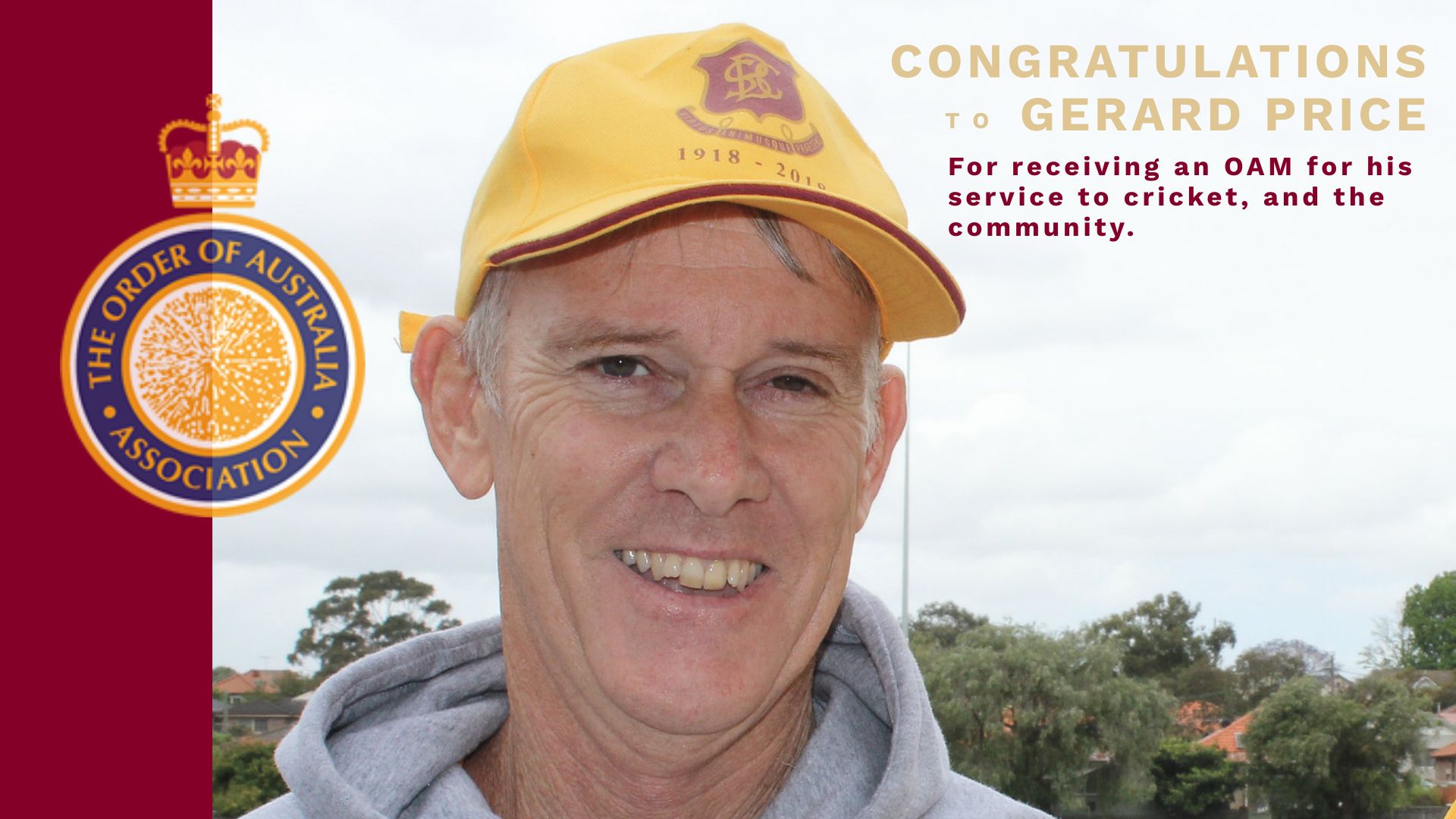 Incredible news with the announcement that Gerard Price has been awarded an OAM (Medal of the Order of Australia) in the Queens Birthday honours list.

Gerard has selflessly dedicated his life to the promotion and development of cricket. Gerard joined Briars Sports as a junior player in 1980. He immediately excelled as a player and captain and in 1989 volunteered for the role of Briars Cricket Chairman, a position he has since filled with distinction for some 31 years.  His inspirational leadership has been instrumental in attracting many youngsters to Briars Sports and more generally to the sport of cricket.

Gerard leads by example. His amazing leadership style, drive, dedication, sense of fairness and respect for all makes him an ideal role model. The only reward Gerard has ever sought is the satisfaction of seeing the successful development of the many young male and female cricketers who have been attracted to the game.

He is held in high esteem by the entire Sydney-wide cricket community due to his selfless contribution to the sport.  In 2013 Gerard was inducted into the Shires Cricket Hall of Fame.

Since taking over as cricket chairman Gerard has moulded the Burwood Briars Cricket Club into the most successful Shires club in history and across those 31 years the Briars have won 18 Club Championships (the next most successful club has won 3) and an amazing 40 premierships.

Gerard has also played a pivotal role in the introduction, growth and overseeing of some 42 junior male and female cricket teams at the club. Our Briars Cricket juniors are the envy of many other clubs and associations.

These successes are primarily attributable to Gerard’s tireless work in attracting young players to the sport through strategic planning, schools programmes and numerous other initiatives. The team building culture that Gerard has created ensures that all new players are then provided individual attention, coaching and support that make the Briars the unique club it is.

Gerard’s voluntary service to the sport as cricket chairman of Briars is complemented by his work with Cricket Australia and Cricket NSW where he makes a direct and valuable impact on the community in the Southern Sydney region.

Gerard joined Cricket NSW as Cricket Manager in 2013 after a number of years working with Cricket Australia in a similar capacity. In his role he leads, inspires and supports communities to unite, through cricket. Gerard works closely with associations, clubs, 150 schools and all levels of government in the large and growing multicultural region of Southern Sydney.

In summary, Gerard Price is an extraordinary leader within the Sydney-wide cricket community.  Although only in his mid fifties, he is a person who has provided distinguished service to the cricketing community for thirty years.

In addition to his enormous leadership in the sport for the benefit of others, Gerard has excelled as a player having played for 40 seasons with Burwood Briars, he has amassed almost 8,000 runs, taken over 1,200 wickets and has won 8 premierships as a player.

Gerard Price was diagnosed with neuro endocrine cancer in 2013.  Since then he has undergone four major operations and numerous rounds of radiotherapy and chemotherapy. Throughout his period of illness he has resolutely and cheerily persevered as cricket chairman of Briars Sports Club, as a player and also in his position with Cricket NSW. Family have always played a major role in Gerard’s life and he has enjoyed wonderful support from his wife Jane and children Damian(who plays for the Briars too), Bethany and Erin.

In addition, Gerard has participated in a number of major cancer fundraising events conducted by the Unicorn Foundation, the main events involving cycling from Sydney to Melbourne and separately from Melbourne to Adelaide raising $68,000 in total.

Gerard’s tenacity and ability to deal with adversity is an inspiration to all who know him.

Gerard Price is more than just a cricket legend, he is an incredible person, we at the Briars are so proud of him and we are honoured to have him leading our great club.