01/02/20 – Reasonably good day in oppressive conditions today with all grades having play suspended at different times due to the temperature exceeding 43 degrees.

25/01/20 – The Briars have had a sensational day today with a clean sweep against Balmain/Souths and bonus points wins in 2nd, 3rd and 4th grades.

11/01/20 – As expected there were some tough battles across all grades today against Auburn.

A great day against a very strong opposition and a super way to head to the Christmas break with important club championship points!

14/12/19 – Reasonable day across the grades against Mounties/Southern Districts today.

7/12/2019 – The Briars have had an amazing day clean sweeping rivals Georges River.

Not a bad day against North West Sydney today.

Our Under 24s made it 2 from 3 with a good win over Balmain/Souths today. Batting first the guys were patient in compiling 5-182 off their 50 overs with Phil Maxwell making 45no, skipper Diren Reddy 34no and Anton Demark 27. The Bunnies got off to a flyer and were 0-41 off 6 overs before Damian Price dismissed their main bat and a couple more followed and we had them 3-46, despite a couple of small partnerships from Souths the guys combined well to eventually dismiss them for 128 with Damian Price(below)taking 5-58 capping off a 9 wicket weekend for him(after taking 4 in 2s yesterday). Great win guys!!

In the DC Cup this weekend Briars Gold 1-99, with skipper Smyck making 50no and Gordon 25, hammered Strathfield 98 with Taylor and Dutta picking up 3 wickets each. In the other games Briars Rivals made 83 and narrowly went down to Auburn 89, Briars Brothers fell short making 180 chasing Mounties 205 and in 5th grade we made 170 with Paul Sultana getting 30 but were passed 5 down.

The top 3 clubs in the club championship after the weekend results are;

23/11/2019 – The Briars have had an amazing day clean sweeping rivals Georges River.

1st grade proved again how valuable runs on the board are and pressurised the River out of the game today. Defending 165 the guys turned the screws and dismissed them for 121 thanks to some excellent spin bowling by Brenton Wright 3-20, Arky Arora 2-10(and two great catches) and paceman Damian Price 2-20(and a super catch) to clinch the victory.

3rd grade demolished Georges River(not the only thing demolished at 3s), defending 8(dec)270 the guys were too good and we rolled the River for 126 with Alex Vendrasco taking 4-27 and Jack Rogers 4-26.

4th grade pulled off one of the great Briars victories, chasing 213 we were 8-112 at tea but an incredible 82 not out by Greg Metcalfe, 26 by Will Studley(72 run partnership) and a handy 10 not out from Tommy Threkheld(30 run partnership) got the guys home 9 down!!

Our Under 24s play North West Sydney at Rothwell Park tomorrow so let’s get down and support them and hopefully cap off a remarkable weekend!

In the DC Cup Briars Gold had a great win against the strong Ryde Hunters Hill, we dismissed them for 120 and got the runs comfortably two down with Harry Lee making 53no and Vish Pendyala 51no.

See you all at Rothwell Park tomorrow for the Back to Briars day as our Under 24s take on Auburn in round one of that Comp.

In the DC Cup today Briars Gold  smashed 211 with Cullen making 71 and Dutta 61 and we knocked Auburn over for 156.

26/10/19 – A clean sweep of all grades against Macquarie university.

Fantastic day today with a clean sweep of all grades against Macquarie University. In oppressive conditions 1st grade and 3rd grade had comfortable first innings wins at home whilst 2nds and 4ths had to battle the heat and the unsuitable Macquarie Uni facilities and both had strong wins.

A solid rain affected day one against Epping today in the battle for the Turnbull/Richardson Trophy.

1st grade didn’t start until 210pm and played just 54 overs and at stumps we are 8-196. Brenton Wright continued his excellent start to the season making 52 and Jack Thomas made 47 on his return innings to the Briars.

2nd grade had a very good day, after being sent in we made 5 declared for 291 and we have Epping 2-10 at stumps. Our English import Tom Parton(video below) blasted 120(16x4s, 2x6s) and combined with Harry Peters 89 for a 4th wicket partnership of 203. Mick Towells picked up two vital Bulls wickets at the end of the day.

3rd grade have already picked up first innings points, Epping were 2-73 at one stage before collapsing to be dismissed for 105 with James Threkhold picking up 3 wickets and Darren Leichsenring and Jeremy Wedd 2 each. We are 8-114 at stumps with Alex Alex Favotto making 40 and Patel 37.

Our 5th grade had a very good narrow win over Auburn today. Batting first we made 8-111 off our 40 overs with Pat Roach making 43 and we knocked over the Eagles for 106 with James Bakker taking a match winning 5 wicket haul.

Huge thank you to both Tabs and Gareth who captained in today’s inter club game at Ron Routley for those players not playing this round, it was a really worthwhile match.

Well done to our Classics(over 50s) team who had a great first round 4 wicket win over the Cricketers Club of NSW last weekend. Andrew Blaikie and Warwick Hayes both made 30s in our chase of 143 with Gus Fernando 3-16 and Dave Trewin 2-10 leading the way with the ball.

Training is outdoor this week with daylight saving meaning it will be back to the normal Wednesday sessions.

Another hugely successful Briars Presentation Night was held at the club on Saturday the 27th April. A capacity record crowd enjoyed reflecting on yet another amazing season for the club and we celebrated the numerous semi final appearances, another club championship and two more premierships. As well as the individual awards on the night a number of past premiership reunions were held with players from the 1960s right through until today present.

Congratulations to all of the winners of individual players players awards and they were as follows;

In addition to this the following two prestigious Annual Trophies were presented;

Thank you to the Briars caterers, everyone who assisted with the evening and Gerard who once again did a great job as MC.

Congratulations to the whole club on what’s been another amazingly successful season. To win the Club Championship again, 2nd and 4th grade premierships, runners up in 3rd grade and Under 24s and semi-finalists in 1st and 5th grades is remarkable!

2nd grade won one of the best Grand Finals ever in that grade. On day one we toiled hard on a great Drummoyne Oval deck to knock Auburn over for 236 with Matt Roper taking 4-31 and Steve Davis 2-33 and we were 0-3 at stumps. Chasing 236 against a strong Auburn attack was always going to be tough assignment but the guys somehow found a way to do it. We lost wickets at key times but an aggressive 70 from Kale Barton and a match winning 64 not out from Brett ‘Kanga’ Bastow got the guys home 9 down on the back of a 43 run 9th wicket partnership with Sam Tregeagle(21) and an unbeaten 17 run last wicket one with Craig Andrews(4no). The Briars fighting spirit enables us to find a way to win these tight games, congratulations to Kanga who was man of the match and Declan Kennedy, the skipper, on guiding the guys to win the S J Mayne trophy. Commiserations to a tough Auburn team and thank you Nick Govers and the Sydney Cricket Club for allowing us to play on one of the best grounds in Australia.

3rd grade started late on day one due to the heavy outfield and made it to 2-70 at stumps at Airey Park. On day two we were dismissed around lunch time for 152 with Alex Favotto making 41 and Brad Sculley 26. We took some early wickets but ran out of time
on a good batting deck and Strathfield finished 5-135 off 76 overs and were crowned premiers due to their higher ranking in the semis. Well done to Brad Sculley and the whole 3rd grade team on a great season and congratulations to Strathfield on their win.

4th grade became the first team in any grade in Shires to win 5 premierships in a row. Resuming on day two at 1-18 at Rothwell Park after starting late on day one against Strathfield the guys faltered to be 5-64 before a match winning 136 run partnership between skipper
Lloyd Andrews 64 and Paul Pannuti 66 sealed the result. We were 8-264 with Anthony Melnyk on 30 not out and legend Gerard Price 26 not out when the game was called and 4th grade were crowned Harry Culbert Trophy winners. Lloydy was also named man of the match and Gerard has now won a premiership in every grade. Congratulations guys-amazing!!

The guys deservedly celebrated long into the night and into the next day at Rothwell Park as another incredibly successful season drew to a close.

There is definitely only one Burwood Briars!! 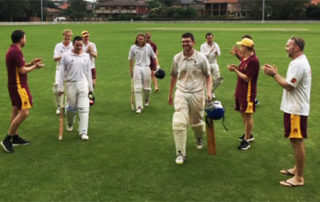 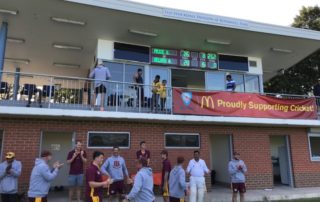 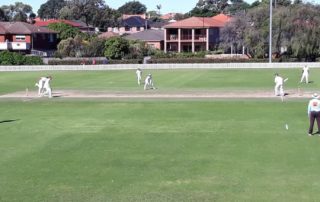 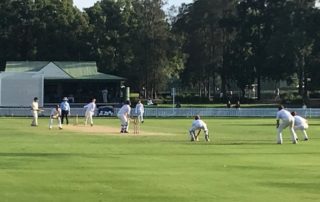 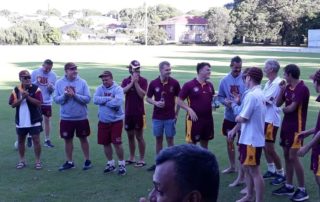 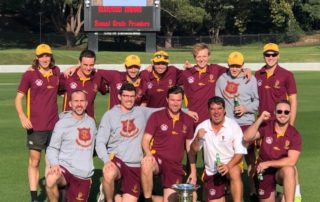 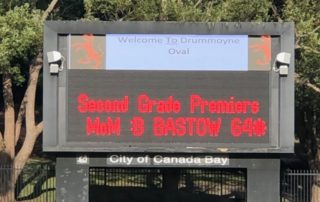 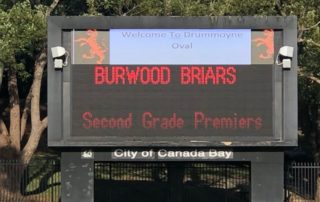 The mighty Burwood Briars have won 2nds, 3rds and 4th grade which means we have 3 Briars Cricket teams in this weekends Grand Final, 1st grade fought hard but went down to Mounties and their season is over. So, including Under 24s, the club has made an incredible 4 out of a possible 5 Grand Finals this season….plus a record breaking 7th Club Champs in a row! 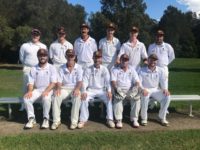 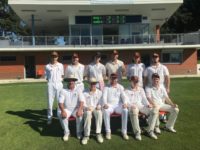 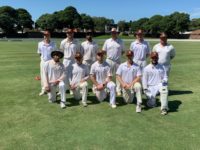 The venues for this weekends Grand Finals have been pretty much confirmed, all games will be played over Saturday and Sunday commencing at 10.30am;

A few interesting stats about the Briars over the past 10 years;

Some more interesting stats over the past 20 years;

There’s  only one Burwood Briars!